WFF Contributes to Youth Assembly and Policy Paper at Stockholm+50

From 2 - 3 June 2022, the WFF joined forces with youth across sectors and around the world in the self-organized Youth Task Force, which convened at the Stockholm+50 Youth Assembly two days before the official conference hosted by UN Environment. The Youth Assembly was designed to facilitate youth participation and engagement throughout the Stockholm+50 processes and was led by the by National Council of Swedish Youth Organizations (LSU) and the Children and Youth Major Group of UNEP (CYMG). The Task Force produced a range of side-events, creating a safe and inclusive space for drafting youth interventions in the Leadership Dialogues and, most importantly, a Youth Policy Paper that was presented in the Plenary to the Director of UN Environment and to the president of the Assembly.

WFF representative Michelle Seck, head of the WFF Youth Action track, advocated for topics on food and agriculture in the discussions and drafting, playing an essential role in securing food as a main topic on all climate related events and policies through the youth lens. In the final Youth Policy Paper, the recommendations under the WFF Youth Action Compendia have been included to represent the youth view for the agrifood system transformation.

The Youth Assembly brought together youth from all regions and backgrounds to discuss their needs and demands to decision-makers, proving young people’s ability to self-organize and work across silos under the theme of ensuring “a healthy planet for the prosperity of all – our responsibility, our opportunity.” UN Secretary-General's Envoy on Youth Ms. Jayathma Wickramanayake commended the Youth Assembly, stating that, “Youth broke stereotypes of ways of working. They have worked across barriers and conventions to come up with a common position in this Policy Paper.” Youth are now looking to officials to respond to the demands made in the Policy Paper.

Inclusion of the WFF Youth Action Compendia in the Youth Policy Paper, as well as the WFF and food-related Stockholm+50 side events “ Agrifood Tech Innovations for a Healthy Planet”, “Indigenous Peoples' food and knowledge systems” and the Global Kick-off of the EAT-Lancet 2.0 Commission (which included the participation of WFF Champion Sophie Healy-Thow and WFF youth Leader Pramisha Thapaliya) represented major strides forward toward addressing the links between our agrifood systems and climate change. However, with only two official side events out of 45, and one Multi-Stakeholder Action Hub event pertaining to food as a means to help reduce our impact on the environment,  it was made very clear that the topics of food and agriculture, food loss and waste, and the overall linkages of agrifood systems and climate for a better future for all were not sufficiently captured in the Stockholm+50 conference. This is worrisome, considering that agrifood systems – from production to consumption – contribute to one-third of total greenhouse gas emissions, and methane from waste and agriculture represents 65 percent of all human-caused emissions.

Food is the single strongest lever to optimize human health and environmental sustainability on Earth. However, the way food is produced and consumed is currently threatening both people and planet. Crop and livestock production occupy about half of the world’s habitable land surface and consume about three-quarters of the world’s freshwater resources. About three-quarters of deforestation – currently running at about five million hectares a year – is driven by agriculture, particularly clearing forest to plant crops or raise livestock, driving biodiversity loss and contributing to climate change.

There is still an extensive amount of work to be done to establish food on the climate agenda, but as the first in-person international conference or convention attended by the WFF, we are securing our seat at the decision-making table and building our network so that food is not only on the climate agenda, it is made a key priority area.

During the closing statements in the Plenary, Stockholm+50 Youth Task Force leader Bjorn Fonden urged world leaders and the UN system to “Step up, or step aside, our lives depend on it.” The Youth Policy Paper is a clear path towards ensuring we divert our course from the current triple planetary crisis toward a more sustainable future.

Join us to keep growing the movement and the momentum! 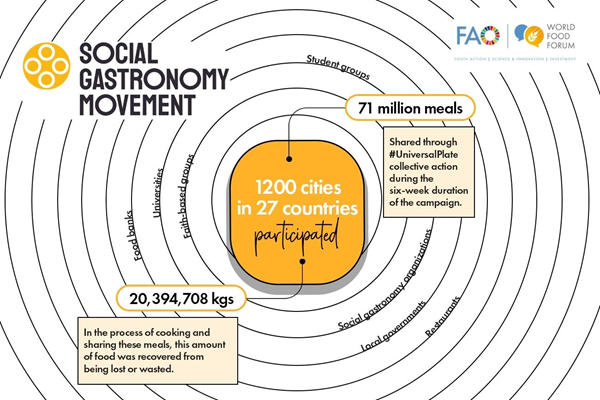